Captive Canada:
Renditions of the Peaceable Kingdom at War,
from Narratives of WWI and the Red Scare to the Mass Internment of Civilians 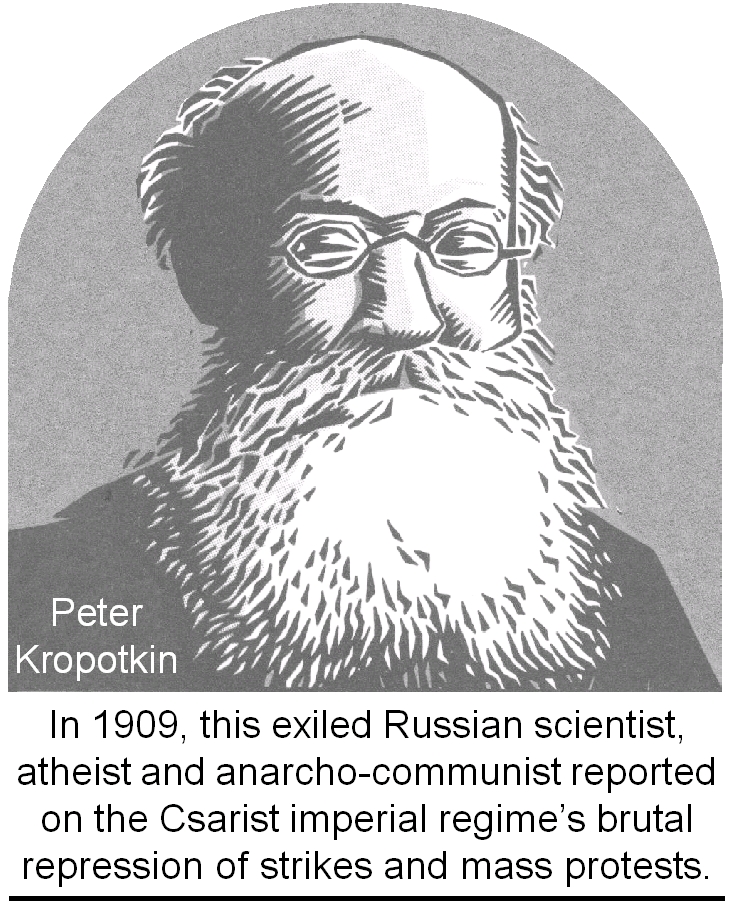 Revolution across the Russian Empire was sparked in 1905, when Czarist troops shot and killed a thousand or more peaceful protesters in St. Petersburg.  In the Russian, Polish, Ukrainian, Finnish, Latvian and Estonian protests that followed this “Bloody Sunday” massacre, millions joined general strikes and mass rallies.  To crush this struggle for justice, democracy and labour rights, imperial troops killed thousands of socialists and anarchists, and interned some 300,000.

In 1909, Britain’s Parliamentary Russian Committee, which included an Anglican Bishop and two dozen MPs, published The Terror in Russia, by Peter Kropotkin, a Russian geographer, economist, atheist, evolutionary theorist and anarcho-communist.1 Using reports by the Czarist regime, he showed that 2,350 civilians had been sentenced to death and executed in Russia between 1905 and 1908. In addition, 1,330 civilians were shot without sentence and hundreds of soldiers were executed for mutiny. Other state murders included those “shot in the streets”2 by Csarist forces during huge protests and strikes.

Kropotkin also cited official data on 221,000 Czarist prisoners, and estimated that 50,000 to 100,000 others were being held in local “police lock-ups.”  The crackdown also created more than 700,000 internal refugees in European Russia.  “[I]n consequence of repression after strikes,” said Kropotkin, these people were forced to become “mere outlaws wandering from one city to another...without any possibility of returning to their native places and to their previous occupations.”3

The elites of Canada’s church and state became more openly phobic. For example, in 1911, an official Catholic paper “sowed panic... describing Montreal as a hotbed of Russian anarchists who” as “veterans of the [1905] mutiny on the battleship Potemkin,” were “the most dangerous elements of Russian Jewish nihilism.”6

1.Born a prince, Kropotkin renounced his titles and became a scientist. Invited by former socialist Prof. James Mavor to lecture in Toronto, he toured Canada in 1897, visiting Mennonite communities. Urged on by Kropotkin and Leon Tolstoy, Mavor convinced Canadian authorities to allow thousands of Russian Doukhobors to create prairie communes. Many were interned in WWII labour camps for pacifist beliefs.