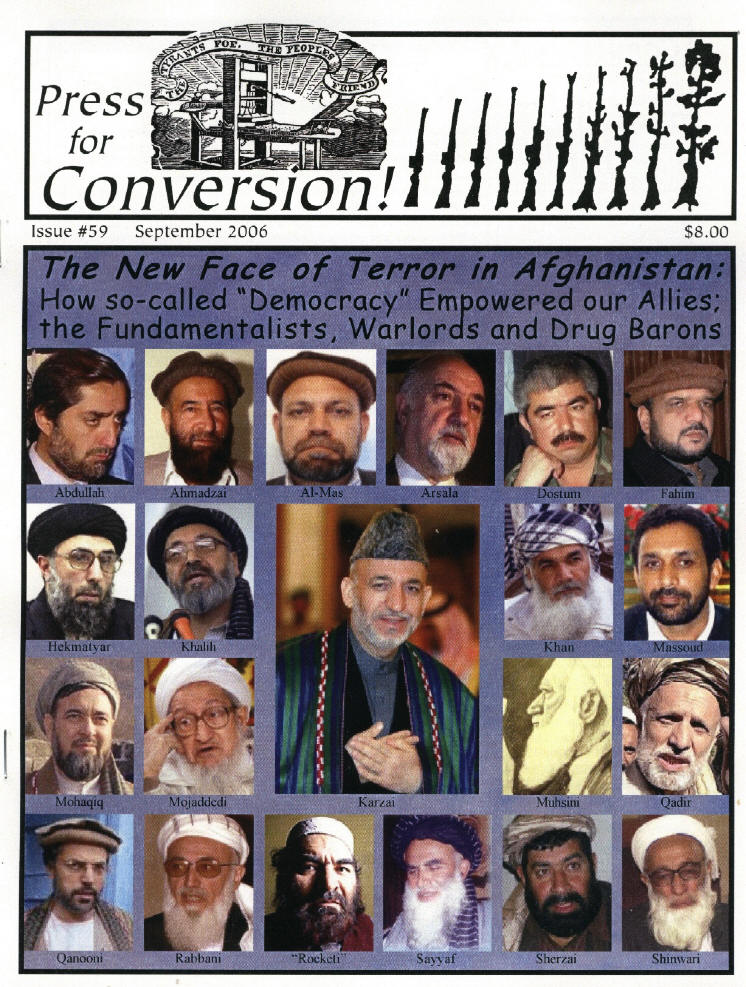 The New Face of Terror in Afghanistan:
How so-called “Democracy” Empowered our Allies;
the Fundamentalists, Warlords and Drug Barons.
Press for Conversion! (Issue #59) September 2006
(View the magazine's cover and table of contents here)

A phoney democracy–dominated by warlords, drug barons, oil industry representatives and World Bank administrators–has now been successfully imposed upon Afghanistan by the world's major military and economic powers, including Canada. The current issue of Press for Conversion! outlines the key steps in the supposedly “democratic process" that brought this government to power. The process began very soon after 9/11, which offered a convenient pretext needed for the U.S. aerial-bombing campaign, that began on October 6, 2001. Some 3,000-3,400 innocent civilians were killed during the first six months of that U.S. bombardment alone.

Thanks to the subsequent military, financial and diplomatic efforts of American, Canadian and other NATO-member states, many of Afghanistan’s most violent and dreaded terrorists are now back in power, running the country's government.

This issue of Press for Conversion! highlights the litany of appalling scandals surrounding the so-called "democratic process" that aided and abetted this return to power of our closest allies in Afghanistan, the notoriously-brutal "Northern Alliance" warlords and their fundamentalist mujahedeen militias.

Many Afghan people and organizations are understandably outraged that this US-led, Canadian-assisted process of "regime change" was used to replace one a set of murderous, fundamentalist warlords (the Taliban) with another (the Northern Alliance). One such Afghani is Malalai Joya. She is among a small handful of MPs who challenge these warlords in parliament.

Malalai Joya was in Canada to speak at the NDP convention, which passed a resolution demanding that the Canadian government withdraw troops from Afghanistan.
We were very fortunate to be able to arrange for Malalai to speak at a public forum in Ottawa. She was introduced by Richard Sanders, coordinator of the Coalition to Oppose the Arms Trade, and editor of its magazine, Press for Conversion!  Read more about her Ottawa talk here and here.

Several articles in the new issue of Press for Conversion! focus on Malalai's struggles to expose the terrorists and war criminals who have taken over Afghanistan's parliament, including the government's top cabinet positions:

While Canadian governments (both Liberal and Conservative) have echoed the U.S. administration in lavishly praising their own successful installation of this so-called, fledgling democracy in Afghanistan, they have diligently covered up the fact that this "regime change" was riddled with widespread and systematic examples of violence, intimidation and corruption. This so-called "democratic process," that we imposed upon Afghanistan, allowed the intimidation by warlords (and their foreign backers), and included outright vote buying and vote rigging. The entire process, from the Bonn conference of Afghan delegates–that were hand-picked by western powers (2001), through the "emergency loya jirga (grand council)" (2002), the "constitutional loya jirga" (2003), to the presidential election (2004) and the parliamentary elections (2005) was replete with serious examples of manipulation and corruption that have been studiously ignored by western governments and the corporate media.

Inspite of all this horror, the now-"stable" regime in Afghanistan is cloaked in a phoney veneer of respectability that is lauded by western governments and their corporate partners, including the mainstream media.