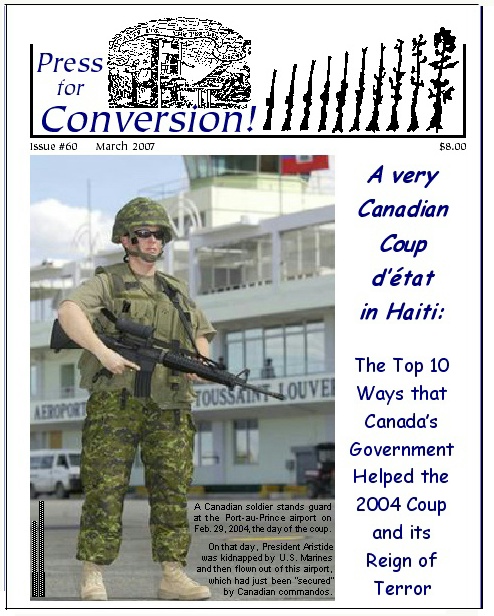 The Top 10 Ways that Canada’s Government

Helped the 2004 Coup and its Reign of Terror

Published by the Coalition to Oppose the Arms Trade (COAT)

Table of Contents and Acknowledgements

This 50-page issue of the Coalition to Oppose the Arms Trade's magazine, Press for Conversion!, exposes ten ways in which Canada's Liberal government was deeply complicit in:

(2) supporting the illegal, coup-installed regime that was responsible for the two-year, human-rights catastrophe that followed.

Click here for information on ordering copies of this new issue.

Haiti's 2004 Coup and its Aftermath

In early 2004, a U.S.-funded, trained and armed paramilitary force of former CIA-backed death squads and soldiers from the military (that President Aristide had disbanded in 1995), attacked Haitian police stations, massacred government supporters and released human rights abusers from prisons. The U.S., Canada and France did nothing to assist Haiti's beleaguered democracy. Instead, they actually demanded that Aristide's elected government share power with political representatives of Haiti's wealthy corporate elite that had lost the 2000 elections and supported the rebels. On February 28, President Aristide was kidnapped and forced into exile by U.S. Marines, with considerable help from a foreign occupation force of largely Canadian and French troops. That day, Haiti's popular government—which had a clear mandate to govern until 2006—was illegally replaced by a puppet regime that was approved by Aristide's political opposition, the occupation governments and the UN Security Council. The brutal, coup-installed regime that ruled for the next two years was responsible for a reign of terror in which thousands of prodemocracy, pro-Aristide supporters were executed and many more jailed without charge.

Here are brief summaries of the various sections in this issue of Press for Conversion!  (To read the articles in these sections of the magazine, just click on the headings.)

Haiti: A History of Tyranny and Resistance

Since first contact with Europeans in 1492, Haiti has been a centre of resistance to tyranny. First enslaved by Spanish conquistadores, the aboriginal population was exterminated in the New World's first genocide. The African slave trade began in Haiti which, as a result, became the richest of France's colonies.  The Haitian revolution, born of a slave revolt in 1791, was quickly followed by a crippling, extortionate debt to France. During most of the 20th Century, U.S. marines, corporations and death squads ruled the country. Haiti finally freed itself when Jean Bertrand Aristide won by a landslide victory in the 1990 elections. Months later, however, his government was removed in a CIA-backed coup. In 1994, after agreeing to follow U.S. economic dictates, Aristide was returned to power by American troops. After winning the 2000 elections, Aristide's government was ousted in 2004 during another U.S.-led coup, which received considerable backing from Canada and France.  For two years, Haiti was ruled by an illegal, coup-installed, puppet regime that could not have survived without strong support from the U.S., Canada, France and UN-sanctioned "peacekeepers." This regime's reign of terror was a human rights disaster. With the complicity and assistance of UN troops, thousands of prodemocracy advocates were massacred and many more imprisoned without charge. Although foreign occupation governments and the Haitian elite tried to rig the 2006 elections, an Aristide-associate, René Preval, won. However, despite this electoral success for Haiti's impoverished majority, the country remains under occupation by UN-sanctioned troops which continue to conduct brutal raids killing innocent people in poor, urban communities where support for Aristide's return still remains high.

The Canadian government created the International Commission on Intervention and State Sovereignty and spearheaded its “responsibility-to-protect” doctrine. Thanks to Canada’s initiative, this precept is now used to justify and legitimize illegal wars under the guise of “humanitarian interventions” even if—as was the case in Haiti—they have democratically-elected governments. The major powers have replaced their supposed “right” to invade, occupy and impose regime change with the much more palatable moral “responsibility to protect” any country they deem to be a “failed state.”

Organizing a Planning Meeting to Prepare for Regime Change and Occupation

One year before U.S., French and Canadian troops, helped oust President Aristide and replaced his democratically-elected government with a puppet regime, our Liberal government organized a secret, high-level meeting of North American, Latin American and European powerbrokers to discuss possible regime change in Haiti. Their planning session, called “The Ottawa Initiative on Haiti,” also discussed the occupation of Haiti by foreign troops. This international event was held at the government’s Meech Lake conference centre near Ottawa, between January 31 and February 1, 2003.

Joint Task Force 2 commandos/sharpshooters were among Canadian troops that seized Haiti’s main airport on February 29, 2004. This was instrumental in that day’s kidnapping and forced removal of President Aristide by U.S. Marines. Then, 500 Canadian troops joined U.S. and French occupation forces (MINUSTAH) to prop up the new regime that was illegally-imposed. MINUSTAH has been responsible for human rights abuses including the murder and detention of thousands of supporters of the deposed government. Canada pressured MINUSTAH to use even more excessive force.

Through the UN Police (UNPOL), which the RCMP has led since the coup, Canada has trained and funded Haiti’s police (HNP), which has committed countless crimes, including murder, illegal arrest, torture, rape, drug trafficking and kidnapping. Under RCMP supervision, the HNP has promoted many recruits from Haiti’s military, which Aristide had disbanded. UNPOL has accompanied deadly, HNP raids into poor slums and witnessed unprovoked shootings of peaceful, pro-Aristide protesters. Rather than trying to stop or prevent such atrocities, Canada routinely helps cover them up.

Canada was instrumental in helping to devise, finance, implement and legitimize a destructive, neoliberal program—the so-called Interim Cooperation Framework (ICF)—that reversed many of the economic achievements put in place by the democratically-elected governments of Presidents Aristide and Preval.  The ICF’s economic-restructuring program—created largely by foreign “experts” linked to the World Bank, the UN, the Inter-American Development Bank and the European Commission—benefited international and Haitian elites at the expense of the poor majority of Haitians.

Using International Development Assistance as a Weapon Against Haiti's Poor

In the years leading up to the 2004 coup that ousted Aristide, Canada and the U.S. greatly reduced aid to his government’s social programs. This fostered the conditions of a “failed state” that provided the pretext used to justify a regime change and occupation that were disguised as a “humanitarian intervention.” Canadian and U.S. aid went to right-wing, opposition groups linked to Haiti’s elite that helped stir up domestic and international opposition to Aristide’s government. Once Aristide was removed, Canadian aid quickly increased to support the coup-regime that illegally took over.

After Aristide was kidnapped and a foreign-backed regime was imposed upon Haiti, the Canadian government—particularly the Canadian International Development Agency—gave tremendous financial and administrative support to Haiti’s judicial and correctional institutions. Canada’s assistance was instrumental in allowing Haiti’s coup regime to use its so-called “justice system” to maintain a tight grip on power by arbitrarily arresting, and imprisoning without charge, hundreds of political opponents who supported Haiti’s constitution and its duly-elected, but deposed, government.

While rebels attacked police and government offices across Haiti, Canada refused to help but instead put diplomatic pressure on President Aristide. When the coup succeeded, and a puppet regime was installed, Canada rewarded it with official recognition. Canada then used every trick in the diplomatic book to support Haiti’s unconstitutional regime and to cover for its violent excesses. Our prime minister and top cabinet members led official visits to Haiti. During reciprocal visits to Canada, the top politicians in Haiti’s illegal regime were welcomed with open arms and smiling photo ops.

After helping overthrow Haiti’s elected government in 2004, and propping up the illegal regime and its two-year reign of terror against political opponents, Canada portrayed itself as a great friend of Haitian democracy. Canada became a major funder of a blatantly unfair electoral process designed to disenfranchise Haiti’s poor majority. Canada’s key role was to create and lead the International Mission for Monitoring Haitian Elections (IMMHE). Chaired by Canada’s Chief Electoral Officer, the IMMHE deceptively depicted massive, electoral fraud as if it was a fair process.

A list of Contacts for the Canada Haiti Action Network

Click here to learn about other issues of Press for Conversion!
(For instance, issue #61 focuses on "CIDA’s Key Role in Haiti’s 2004 Coup d’État.")