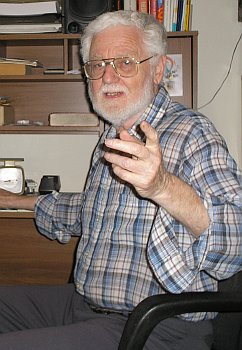 "One of the main barriers to opening people's eyes all over the world about the reality of US foreign policy is the deeply ingrained belief that America Means Well. So, no matter how horrible a particular intervention turns out (see, currently, Iraq), the public remains convinced that the intentions are noble (bringing democracy and freedom). When you show that a war or other intervention is based on a contrived pretext, it becomes much more difficult for the public to accept the idea of noble intentions. It makes people more skeptical and cynical, which they should be.
This is what Richard Sanders' film hopes to achieve."

William Blum, a former US Department of State employee, is an author, journalist and US foreign-policy critic, has written numerous books including:
Killing Hope: US Interventions in the Third World since World War II
Rogue State - a Guide to the World's Only Superpower

Project Summary:
I am beginning work on planning a one-hour documentary to examine the wealth of historical evidence showing that over the past 150 years US war planners have repeatedly used a particular stratagem to deceive the public into supporting for wars. The particular method--manipulating dramatic war pretext incidents--is an important aspect of the modus operandi used by US military/intelligence agencies.

War pretext incidents have provided the trigger or spark needed to ignite propaganda offensives for turning the tide in building public support for wars, invasions, interventions and regime changes.

The basic research, examining 15 US wars in which war pretexts were either provoked, allowed to occur, fabricated or self-inflicted, was done when compiling Press for Conversion! (issue#50), called:
"Going to War: The American use of War Pretext Incidents (1846-2003)."

If you are interested in supporting this project financially, with inkind donations, or by volunteering, please email me:
Richard Sanders, coordinator, Coalition to Oppose the Arms Trade (COAT)

More Detailed Project Description:
This COAT video project will examine a wealth of historical evidence showing that American war planners have consistently and repeatedly used a particular stratagem to rally public support for various wars and military operations in which the US has been involved. Although the particular method in question is but one device in the war planners' toolkit, it is nevertheless an important aspect of their modus operandi.

These incidents have always been used to provide the trigger or spark that is needed to ignite propaganda offensives that eventually turn the tide in building public support for wars, invasions, interventions or regime changes. The term that I have coined for this device to start wars is: "war pretext incident."

All of the basic research most of the core elements of the script for this documentary have already been done. It is based on work that I did for Press for Conversion! (#50):
"Going to War: The American use of War Pretext Incidents (1846-2003)."

Case Studies
U.S. history is replete with examples of this phenomena. Every major war, invasion, intervention and regime change in which the US has been involved over the course of the last 150 years has been promoted using at least one major war pretext incident:

1846: The Mexican-American War (Border skirmish sheds "American blood on American soil")
1898: The Spanish-American War (Sinking of the US Battleship Maine)
1915: World War I (Sinking of the Lusitania)
1941: World War II (the Pearl Harbour attack)
1950: The Korean War (Border incident)
1954: War in Guatemala (Czech arms shipments)
1964: The Vietnam War (Gulf of Tonkin incident)
1979: Covert War in Afghanistan (Provoked Soviet Invasion)
1983: The Invasion of Grenada (Coup and threat to US students)
1986: The Bombing the Libya (La Belle Disco Bombing)
1989: The Invasion of Panama (Attack of US soldiers and US woman)
1991: The Iraq War (US greenlight for Kuwait invasion; Incubator deaths)
1999: NATO's War Against Yugoslavia (Racak massacre)
2001: The "War Against Terror," Part 1: Afghanistan (9/11 attack)
2003: Part 2: Invasion/Occupation of Iraq (9/11 and weapons of mass destruction)

Using about eight of these examples as case studies, the documentary will highlight several basic underlying similarities. The documentary will also look at formerly, secret documents--produced for the US Joint Chiefs of Staff in 1962--describing various fabricated incidents that the US intelligence/military could carry out and then blame on Cuba. One such Top Secret "Project Northwoods" document is called "Pretexts to Justify Military Intervention in Cuba."

Common Characteristics
War pretext incidents have several common characteristics. By examining some of the above-listed examples of war pretext incidents, plus the Operation Northwoods documents, the documentary will establish and elucidate the recurring patterns characterizing the "modus operandi" that has been consistently used by US warplanners:

* Highly-charged, dramatic events are used to stir the righteous outrage of US politicians, opinion leaders, the media and the general public.
* These events, used by war planners to rally support for going to war, are:
* deliberately provoked,
* known in advance but allowed to occur,
* completely fabricated, or
* staged to appear as if carried out by the enemy.
* Innocent US citizens (or US military forces supposedly conducting routine, inoffensive activities), are perceived to have been unjustly threatened or outrightly attacked
* There is some real or apparent loss of life and/or property.
* The events are quickly exploited to the maximum extent possible and become the centrepieces in government-led, media-propaganda campaigns.
* News about these incidents is used to arouse widespread public sympathy for their victims, hatred of the enemy and revengeful support for a quick, US military response.
* These incidents are used to cloak, or distract attention away from, actual economic or geostrategic reasons for the military action (grabbing territory or colonies, spheres of influence and/or boosting corporate profits), which would be much less popular and therefore less useful in rallying public support for war.

Although the documentary will focus on US examples of war pretext incidents, it will be made clear that war plotters from many other nations have also been guilty of using the same stratagem. In fact, military history from all over the world is filled with a litany of such examples, going backing thousands of years, to classical Greek and Roman history.

Underlying Analysis:
Among all human institutions, military organizations are perhaps the most conservative and resistant to change. Their basic structures and methods have, in many ways, remained virtually undisturbed for thousands of years. Their extreme longevity is in large part due to two factors:

(1) Militaries function using a rigid, authoritarian adherence to extremely strict rules that are managed and enforced by hierarchical lines of authority.

(2) Equally important are the tried-and-true methods of military indoctrination. These have been used successfully over hundreds of generations, by military forces of all stripes, to brainwash recruits. Such extreme, training methods are needed suppress the normal feelings of revulsion towards performing inhumane acts of ultraviolence.

These two are well known characteristics of military institutions and are not controversial.

However, we must not lose sight of the fact that military force, and the institutions of war that control it, are essentially a tool wielded by a society's most powerful political and economic actors. War usually has extremely practical purposes. It functions to maintain the dominance and power of economic elites. These powerful economic sectors of society, that command and control a military's armed personnel and their machines of war, know that to stay in power they must cloak themselves behind political leaders and feel-good platitudes that are palatable to the population.

Psy Ops are therefore equally important to the persistence of military structures. Deceptive psychological operations are used to build support for military operations and to cover up the real functions of war. They use propaganda to trick the military's biggest potential enemy -- the home population that supplies it with cannon fodder and the other tools of war.

The purpose of this video documentary war pretext incidents is to unveil a shocking history. We must study it in order to avoid its continued repetition. If people were to become fully aware of the lengths to which war planners have gone to manufacture publicly-acceptable excuses for war, then they may be better equipped to recognize and see through other such phoney pretexts when they inevitably are foisted upon us again in the future.

However, the purpose of this documentary is not merely to observe and document war pretext incidents from a detached, academic position. The project is being undertaken to foster a passionate distrust of official war pretext narratives and to inspire people to resist and defy the institutions and individuals whose official narratives are so cleverly used to justify aggressive and illegal wars.

Knowledge of the history of lies, deception and psychological operations is a form of vaccination useful in inoculating people with healthy doses of skepticism. The documentary is therefore seen as part of a greater, anti-war immunization program necessary to help counter our society’s long-standing susceptibility to artificially-created “war fevers”

Experts to be interviewed:
Experts to include authors of books dealing
* with specific war pretext incidents
* with many examples of deception and war

Efforts will be made to interview experts from foreign countries which the US warplanners cooked up wars against, such as:
Cuba, Spain, Korea, Vietnam, Grenada, Panama, Iraq, Yugoslavia, etc

Types of Support
COAT is now looking for help financial help to begin work on this documentary.

COAT subscribers and supporters will be asked to make financial donations, and/or to assist in whatever way they can in the task of raising money for this project.

Volunteer assistance will be sought from those with previous experience in video/sound production, editing, and other aspects of documentary production.

People who will eventually want to order copies of the video or DVD, will be able to do so in advance.

Support from foundations and other institutional sources will also be sought.