It was 30 years ago! Personal reflections on ARMX 89:

by Richard Sanders, founder/coordinator, Coalition to Oppose the Arms Trade 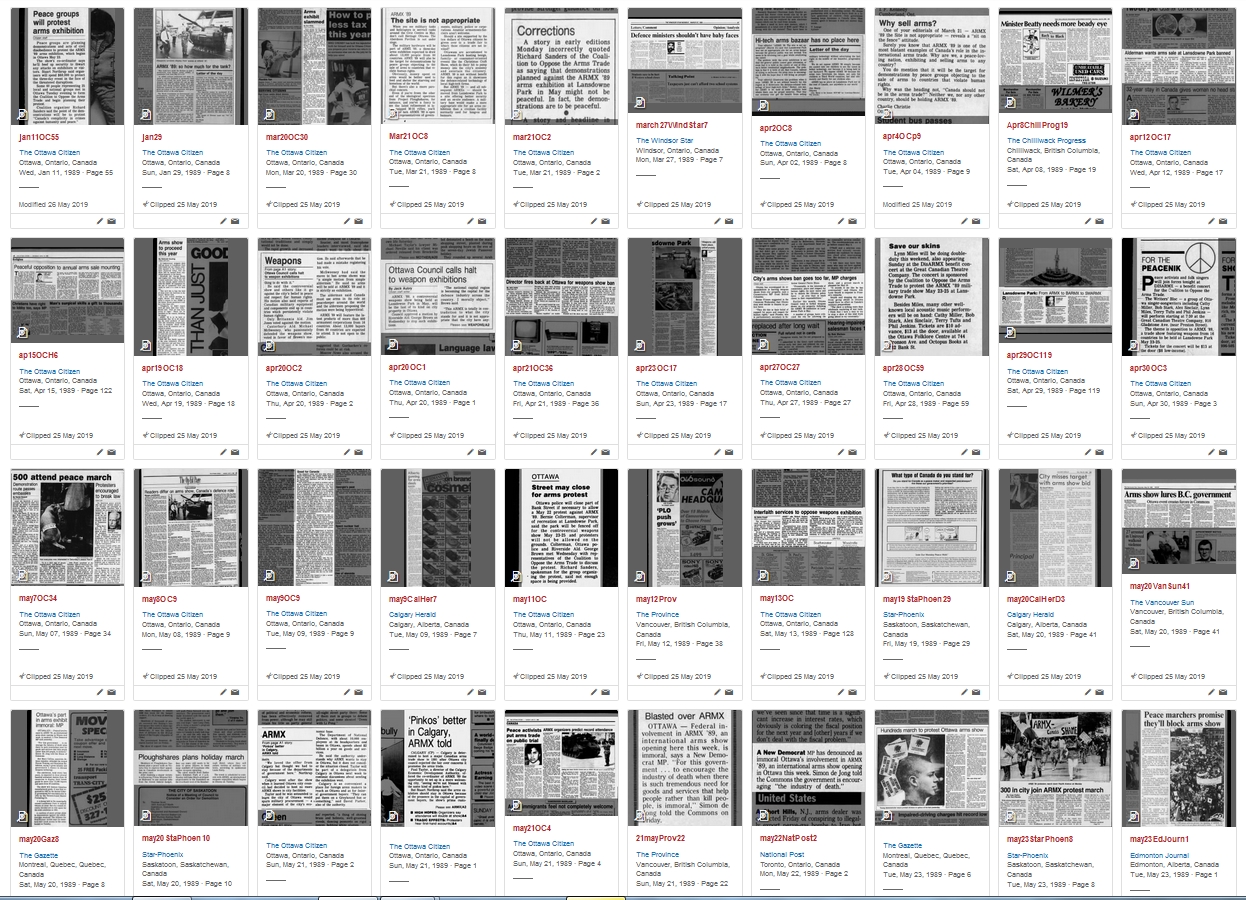 The 30th anniversary of our campaign against Canada's largest-ever arms trade show, ARMX 1989* has just passed.  I was in the thick of this huge effort and frankly I'm still recovering. Here are 164 news clippings about our opposition to ARMX from that year which may help explain why.

In 1989, Ottawa Council banned all future arms shows from city property (April 19), several thousand joined the Coalition to Oppose the Arms Trade's Peace March through Ottawa to the gates of ARMX (May 22), 150 activists were arrested during a peaceful blockade of ARMX entrances by the the Alliance for Nonviolent Action (May 23), from January to December of 1989 there were 100s of radio, TV, magazine and newspaper articles about our antiARMX efforts, and millions of people learned for the first time that Canada exports military hardware to warmongers and oppressive regimes. This campaign surpassed the combined opposition to dozens of Ottawa arms shows held since then.

Here are some personal reflections on those heady days three decades ago and why we were so successful in our efforts against ARMX 89:

The 1980s were the new 1960s:
The Cold War was very hot. Many were scared that nuclear war was looming.  A far-right US President Reagan was demonising the Soviets as the so-called "Evil Empire" and he'd even commemorated Nazi graves in Germany. The US -- as always -- was waging various proxy wars around the world, most notably through the contras in Nicaragua and Bin Laden's mujahadeen in Afghanistan. The CIA's ongoing role in  state-backed terrorism and drug smuggling was being exposed on a daily basis with Contragate and other "-gates." After the US deployed about 500 nuclear missiles (Trident IIs and Cruise) to Europe and the Trudeau Liberals allowed the US military to test Canadian-made cruise missiles here, the peace movement was more active than at anytime since the 1960s.  There were millions protesting in Europe and the US, and  Canada's "Refuse the Cruise" protests brought 200,000 or more protesters into our streets.  While that peaked in 1983-84, the antiwar spirit was still very strong in 1989.

Before ARMX 89, Canadian peace activists had never really protested any arms show.  (Although the national group, Project Ploughshares, did research and lobbied on arms trade issues, it has never organised a demonstration.)  In 1983 and 1985, ARMX was held at a remote military base in Quebec. I learned about ARMX soon before it moved to Ottawa in 1987.  I got inside ARMX 87 as a peace activist/reporter. (I produced a bi-monthly community radio show, called "Voice for Peace," on CKCU FM throughout most of  the 1980s and 1990s.) I browsed the show, picked up all the brochures, chatted with exhibitors and interviewed the show's main organizer (Wolfgang Schmidt). Although I alerted local peaceniks, including family friend and fellow activist Murray Thomson (who died in May 2019), there was little time to organise a proper protest.  As a result only about 30 people -- mostly Quakers -- came to that event.  (See photo.) But having researched ARMX and seen it from the inside, I knew it was ugliest and the most blatant manifestation of Canada's hidden role in the international arms trade. Realising the potential of using ARMX to build public awareness on bigger antiwar issues, I was determined to organize a campaign against the next arms show when it returned in 1989.

The Coalition to Oppose the Arms Trade (COAT)

When I started COAT in December 1988, I had been working full time in the peace movement for five years.  As coordinator of Ottawa's Peace Resource Centre, I had links to dozens of peace, human rights and development groups.  Our initial COAT meetings were attended by 60 activists from several dozen groups.  COAT eventually received endorsements and support from about 75 local and national organizations. COAT had four committees and each one met in between our monthly meetings during the months leading up to ARMX. We raised awareness with letter writing, petitions, media efforts, and held three large COAT events: a Public Inquiry into the Arms Trade and Human Rights (May 20), an Interfaith Peace Service (May 21), and a Peace March/Rally at ARMX (May 22). COAT brought together the usual diverse crowd of 1980s peace activists, from elderly "church ladies" to youthful punk rockers, and everyone in between. While there were a few people in 1989 who merely wanted ARMX moved from its venue in a quiet downtown neighbourhood, everyone else was keen to denounce Canada's booming business of war profiteering. The NIMBY syndrome however became much worse during our 2010 campaign when mainstream peace activists wanted to focus only on CANSEC's location and criticised COAT pamphlets because they opposed the arms trade in general. While, others promoted moving CANSEC out to the airport where it is now, I suggested they hold it on Parliament Hill.

The Alliance for NonViolent Action (ANVA)

ANVA, which no longer exists, was an important network of dedicated antiwar activists from across Ontario and Quebec who were devoted to using nonviolent direct action to resist militarism in Canada.  It played a key role in the antiARMX 89 campaign and in promoting COAT's antiARMX rally. I had been an ANVA activist and organizer in Ottawa since 1984 and was on its "Continuations Committee." Throughout the 1980s, ANVA organised numerous major civil disobedience actions, many in Ottawa. During our court trials we exposed the state institutions responsible for international crimes. In Ottawa, where I was one of the few ANVA activists, our efforts had often focused on low level test flights.  (My parents -- both WWII veterans -- were also involved in ANVA.  While they had brought me into the peace movement, which they'd been active in since the late 1950s, I got them involved in civil disobedience.) ANVA put forward a resolution that COAT endorse their civil disobedience action to block access to ARMX but a few groups were opposed. Most vocal in opposing ANVA's plan was the national group Project Ploughshares whose representative announced at our meeting that they would immediately leave COAT if it voted to endorse ANVA's peaceful action.

One of the attendees at the COAT meeting in January 2019 was City Councillor George Brown.  He was silent throughout the meeting but when leaving he said he was impressed by what he'd heard and would endeavour to get the Ottawa Council to ban all future arms trade shows from  municipal property. He admitted later that he didn't think he'd succeed, but he did.  On April 19, the City passed Brown's motion and Ottawa's ban on arms trade shows held for the next 20 years. That success provoked some of the many media stories during our antiARMX campaign that helped us build towards our events in May. The motion stated, in part:

"...the arms trade has little or no consideration of moral or humanitarian issues in that weapons have been used against civilians;

...exports of Canadian military equipment and components end up in countries which persistently violate human rights;

...the international arms trade serves to increase militarization throughout the world and is inconsistent with arms limitations efforts...."

The NDP was another important force at that time which helped to build public awareness about ARMX.  A few federal NDP politicians were particularly supportive of COAT's efforts and got ARMX into the news during the months leading up to our events in May. In particular, MPs Simon de Jong, Svend Robinson, Dan Heap and Jim Fulton were enthusiastic supporters on the Hill, and I often frequented their offices.  Former MP Jim Manly and former Ottawa mayor, Marion Dewar, were also very helpful. Marion was the MC at COAT's mass rally on May 22, and -- over the following decades -- played similar roles at some of our large events. On May 19, informed by COAT research, the NDP caucus devoted one of its "Opposition Days" in Parliament to force a day-long debate on ARMX. Simon de Jong, seconded by Dan Heap, moved that:
"this House condemn the government's involvement in the arms bazaar, ARMX '89, and calls upon the government:  (1) to cease all involvement in the expansion of the international market for military and policing equipment; and (2) to take action to ensure that countries which violate human rights are prohibited from directly or indirectly arranging purchases of military and policing equipment in Canada."
In response, the Liberals and Conservatives, and their corporate media supporters, all came out in favour of ARMX and continuing the Canadian governments unhindered role in pushing these deadly but profitable exports.

There is one other factor that I think deems consideration when asking ourselves about the success of the peace movement's efforts 30 years ago. During the six months leading up to ARMX 89, COAT had a full-time coordinator (yes, yours truly) who compiled research, wrote articles, produced and distributed reports, pamphlets and posters, urged activists and groups to get involved, did media interviews, organized meetings, dealt with volunteers, and chugged away doing a whole host of other chores that needed doing.  Having someone doing all that work, virtually for free btw, should count for something and should be recognised as a factor in accounting for why the 1989 campaign turned out the way it did.

While our anti-arms trade efforts in 1989 were very successful, the campaign was not without many moments of stress, which have continued over the decades of activism since. While there was the usual disempowering stress that one is up against giant warmongering corporations, politicians and the mainstream media (which constantly discount and belittle ones' efforts), there are other less-often recognized stresses as well, which I have hinted at here. Those stresses are perhaps inevitable when working within any vibrant and diverse movement. I learned a lot during the 1980s, and particularly during the antiARMX 89 campaign, about the stress of dealing with different individuals and groups that represent divergent worldviews about the underlying problems we face and the best strategies for addressing them. That said, I'm glad to have been involved in the peace and antiwar movements for these past 35 years and hope that my personal reflections on ARMX 89 will help peace activists understand our history and build towards a better more equitable future.

As ever, the struggle continues...