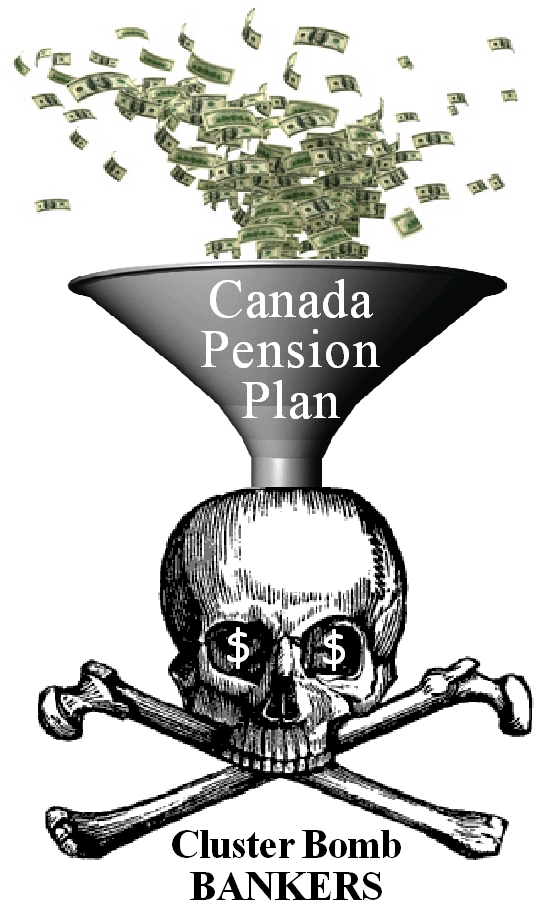 BANKING ON CLUSTER BOMBS:
The CPP is  investing $6.8 Billion in 77 financial institutions that have
made US$18.7 Billion available to seven cluster-munitions manufacturers.

Under Harper's Conservative government, Canada signed the Convention on Cluster Munitions in 2008, ratified it in March 2015 and became a State Party to the convention on September 1, 2015. Although Canadian legislation does not prohibit investment in cluster munitions, Senator Suzanne Fortin-Duplessis said in the Senate in 2012 that “under the bill it is prohibited to assist, encourage or induce anyone to engage in any prohibited activity including knowingly and directly investing in the production of cluster munitions.” (PAX Report, p.209)

Appropriately then, the Canada Pension Plan (CPP) does not now invest in this particular kind of weapons industry.  (However, it does invest in nuclear weapons makers, F-35 war plane contractors and dozens of companies that are among the world's largest weapons manufacturers.  Here are more tables on the CPP's investments in war-related companies.)

Although the CPP does not now invest in cluster-bomb manufacturers, it used to.  As recently as 2012, CPP investments included $231 million in cluster-munitions producers.

However, the CPP is still helping cluster manufacturers.  Current CPP investments (as of its most recent report, March 2016) do include Cdn$6.8 billion in 77 Financial Institutions that have financed the seven cluster-munitions manufacturers identified in PAX's latest report. These 77 Financial Institutions, that are now in the CPP portfolio, have made US$18.7 Billion available to the seven cluster bomb makers that are "red flagged" in PAX's June 16, 2016, report.

Notes:
All of the financial institutions on this list have "financial relationships with cluster munitions producers" that include one or more of the following: (1) ownership or management of (convertible) bonds, (2) underwriting of bond issuances, (3) provision of loan facility, (4) ownership or management of shares, (5) underwriting of share issuances.

* These three figures, for Carlyle, CITIC and Goldman Sachs, are in $US.  This is how they are listed in the CPP source ("Private Equity relationships"), see below.

Private Equity relationships established as at December 31, 2015
(for CPP investments in Carlyle, CITIC and Goldman Sachs.)

2     Worldwide Investments in Cluster Munitions: A Shared Responsibility, June 2016.
By PAX, the Netherlands.

For detailed information about the exact types and amounts of financial relationships that each of these financial institutions have with the Cluster Munitions manufacturers identified in the above report, see  pages.48-141.

Other COAT data tables on the CPP's 2016 Investments in war-related Industries:
$1 Billion in 31 of the World's Top 100 War Industries