Exposing the Legacy of American Corporatism

This issue of Press for Conversion! exposes a little-known, fascist plot to overthrow the U.S. government in the 1930s. We know about this scheme, and the corporate elite behind it, thanks to a high-ranking military whistle-blower: Marine Corps Maj.-Gen. Smedley Butler. Butler is largely forgotten today, but 70 years ago he was the most revered American military hero, the only man to have twice been awarded the Marine’s prestigious Medal of Honor. During his loyal 33-year military career, Butler led invasions, quelled nationalist rebellions and instituted regime changes to benefit U.S. business interests in Mexico, Haiti, Cuba, Nicaragua, the Dominican Republic, Honduras and China.

In 1933, Butler was approached by men representing a clique of multi-millionaire industrialists and bankers. They hated U.S. President Franklin D. Roosevelt (FDR) with a passion, and saw his “New Deal” policies as the start of a communist take-over that threatened their interests. FDR even had the temerity to announce that the U.S. would stop using its military to interfere in Latin American affairs! Wall Street’s plutocrats were aghast! They had long been accustomed to wielding tremendous control over the government’s economic policies, including the use of U.S. forces to protect their precious foreign investments. Because of Butler’s steadfast military role in upholding U.S. business interests abroad, the plotters mistakenly thought they could recruit him to muster a “super-army” of veterans to use as pawns in their plan to subjugate or, if necessary, eliminate FDR.

Butler played along in order to determine who was behind the plot. He later testifying under oath before the MacCormack-Dickstein House Committee on un-American Activities. During that testimony Butler named those who were directly involved in the plot. He also identified an powerful organization that was behind the scenes coordinating and backing the plot. This organization, the American Liberty League, was comprised of some of America's wealthiest bankers, financiers and corporate executives. (Click the American Liberty League link for details on the League's main backers.)

However, the House Committee did not properly investigate the coup plot. In fact they helped to cover it up. The powerful fascists plotters behind the coup were never questioned, let alone arrested or charged with sedition or treason. The Committee even dropped from their report of Butler's testimony most of the names of these wealthy bankers and corporate presidents whom Butler had identified. Butler was of course outraged and he went on national radio to name the names of those behind the coup plot. A sympathetic reporter from the Philadelphia Herald, Paul Comly French was one of the only mainstream journalists to help Butler expose the plotters.

John Spivak, a reporter, from the socialist magazine New Masses, interviewed Butler and helped him to put the coup plotters' names onto the public record. (Click here to read Spivak's account of the fascist plot: "The Plot and the Main Players.") For the most part, the mainstream media either ignored the story or went to great lengths to ridicule General Butler. (In his book 1000 Americans, anti-fascist journalist and media critic, George Seldes, described the media's coverup of Wall Street's plot. Click here to read an excerpt.)

Although Butler's patriotic efforts did thwart this fascist coup plot, the Wall Street bankers and corporate leaders who sponsored it continued to conspire behind the scenes to rid America of FDR and to smash his “New Deal.” Evidence of continued efforts by powerful U.S. fascists to regain control of the White House is illustrated by a 1936 statement by William Dodd, the U.S. Ambassador to Germany. In a letter to Roosevelt, he stated:

“A clique of U.S. industrialists is hell-bent to bring a fascist state to supplant our democratic government and is working closely with the fascist regime in Germany and Italy. I have had plenty of opportunity in my post in Berlin to witness how close some of our American ruling families are to the Nazi regime.... A prominent executive of one of the largest corporations, told me point blank that he would be ready to take definite action to bring fascism into America if President Roosevelt continued his progressive policies. Certain American industrialists had a great deal to do with bringing fascist regimes into being in both Germany and Italy. They extended aid to help Fascism occupy the seat of power, and they are helping to keep it there. Propagandists for fascist groups try to dismiss the fascist scare. We should be aware of the symptoms. When industrialists ignore laws designed for social and economic progress they will seek recourse to a fascist state when the institutions of our government compel them to comply with the provisions.”

Many of the plotters exposed by Butler, had been boosting their fortunes by investing in the fascist experiments of Mussolini and Hitler. Some of them even amassed great profits by arming the Nazis, both before and during WWII.

How is this history of relevance today?

Although all of the top U.S. fascists behind this 1930's plot are now dead, their corporations carry on. These companies, with their roots firmly planted in the fascist milieu of the 1930s, are now among the world’s wealthiest corporations. They continue to exert enormous influence over U.S. government policies, and – by extension – over global matters of war, peace and human rights.

Although those within the highest echelons of U.S. corporate power were willing to instigate a coup to take control of the White House, their plot against FDR was called off. As it turned out, an overt fascist coup was not actually necessary to attain their goals. The fascists behind the plot did eventually succeed in regaining their long-standing influence over the White House and American politics.

President George Walker Bush’s grandfather (Prescott Bush) and great grandfather (George Herbert Walker) were among Wall Street’s ultra-right wing elite. Before WWII, they were among the key players who coordinated the flow of investments from American multimillionaires into Germany. They profited by helping to coordinate the American financing behind Hitler’s rise to power. During the war, they even profited from companies that armed the Nazi war machine and used slave labour at Auschwitz. Then, after the war, Prescott Bush was instrumental in helping to launder Nazi loot for Fritz Thyssen, who was one Hitler’s earliest and richest industrialist backers.

The Bush family's illicit fortune, and their intimate connections to Wall Street and the intelligence community, were essential in launching Prescott Bush, his son George H.W. Bush and grandson George W. Bush, into politics and the oil industry.

Issue #54 of Press for Conversion! (August 2004) is called "All in the Family: The apple does not fall far from the BUSH." This issue focuses entirely on the Bush family’s historic complicity in fascism. Click above to find out more about the contents of this issue.

Issue #53 "Facing the Corporate Roots of American Fascism"
Issue #54 "All in the Family: The apple does not fall far from the BUSH." 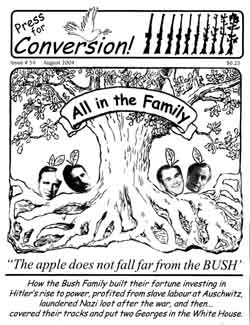 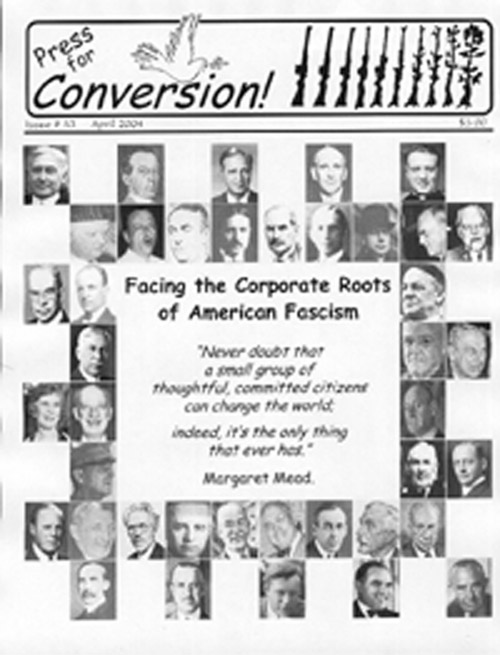