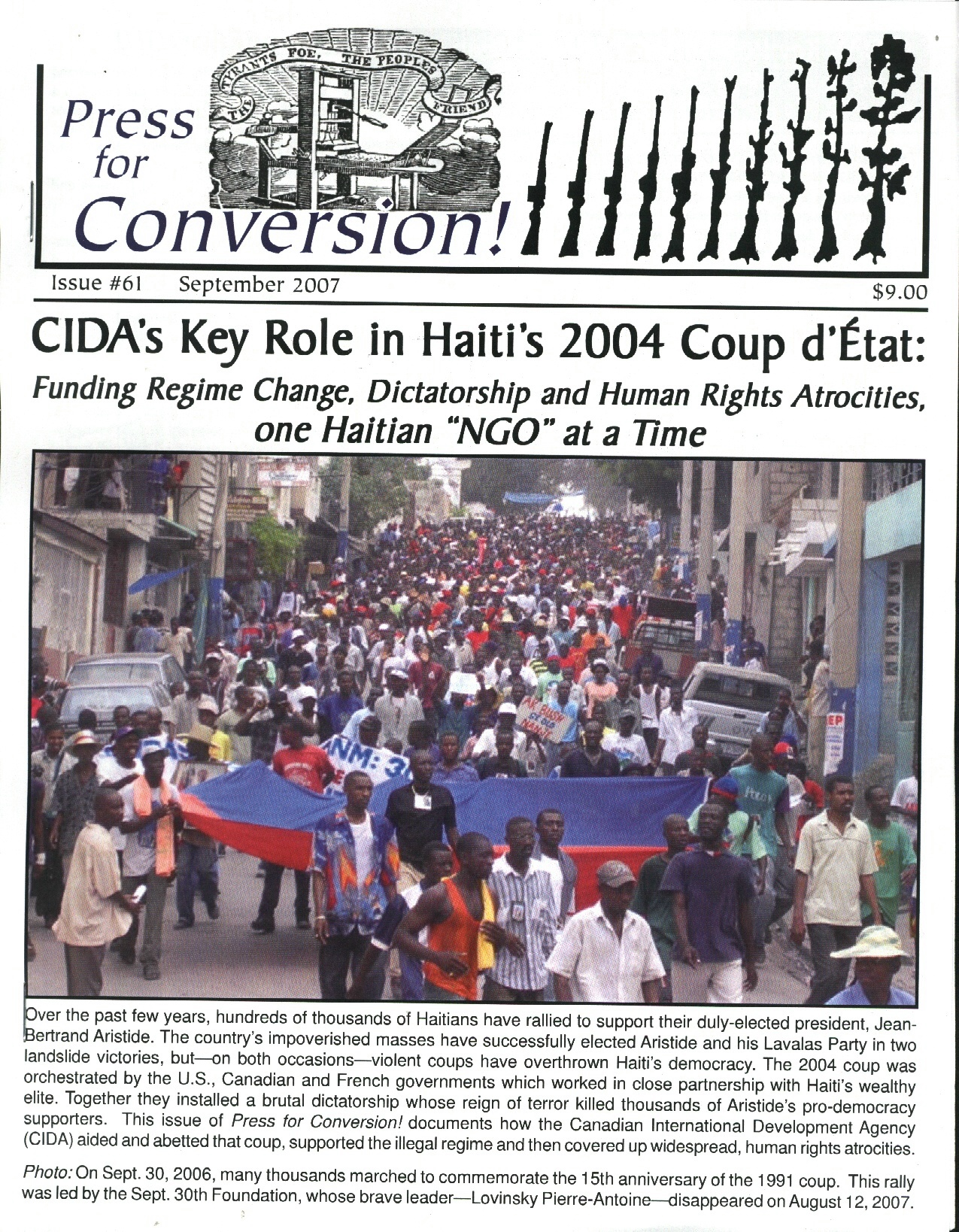 Summary: The Canadian International Development Agency (CIDA) helped overthrow the democratically-elected Haitian government of President Jean Bertrand Aristide in 2004. In the years prior to this regime change—led by the U.S., Canada and France—although Aristide and his Lavalas government were extremely popular among the country's poor citizens, CIDA drastically cut bilateral aid to Haiti.  CIDA simultaneously poured millions of dollars into extremely partisan Haitian organizations that represented the selfish interests of Haiti's corporate elite. These groups helped destabilize Haiti's legitimate government and called for its overthrow.  (The most prominent pro-coup recipients of CIDA largesse, were NCHR, G-184, PAPDA, CARLI, CONAP and ENFOFANM.)

Then, following the Canada-backed coup, CIDA and its proxy groups in Haiti backed the brutal dictatorship that oversaw the illegal imprisonment and mass murder of thousands of Haitians whose crime was simply to support the constitutional government that they had duly elected.  CIDA also funded the illegal coup regime's "Justice" ministry. It was responsible for overseeing Haiti's police, prisons and courts, which led the witch hunt and persecution of pro-democracy advocates.

CIDA's phony "human groups" not only covered up the coup-installed regime's brutal atrocities, they also fabricated evidence to frame the leaders of Lavalas party. By kidnapping and exiling President Aristide, and by illegally imprisoning Prime Minister Neptune, various cabinet ministers, MPs, mayors and other key organizers and activists, the coup regime and its international backers made it impossible for Lavalas to compete in the rigged, CIDA-funded elections of 2007.

Press for Conversion!  September 2007 (Issue #61)
Published by the Coalition to Oppose the Arms Trade (COAT)

Click here for a (large) pdf file of the whole magazine.
Or, click the links below to access all the articles in either htm or pdf formats.

Learn about other issues of Press for Conversion!
For instance, issue #60 is called:
"A Very Canadian Coup d’état in Haiti:
The Top 10 Ways that Canada’s Government Helped the 2004 Coup and its Reign of Terror."